Chris Tucker on Friday is hilarious! If you didn’t know, he was once the highest-paid actor in Hollywood. Born in Atlanta to Louis Tucker and Marry Louis, who ran a janitorial service, he completed high school and moved to Hollywood to try luck in the showbiz industry.

Def Comedy Jam (1992) on HBO was his breakthrough role where he gained attention due to his “clean” comedy devoid of any sexual innuendos. He made his debut in the film industry in 1994 by starring in House Party 3.

In 1995, he appeared in his most famous and well-received movie, Friday, playing Smokey, a drug addict and part of a drug racket. A fun fact: his first Friday audition was a complete disaster. However, he was given a second chance, which turned the tide in his favor, and he got the role.

Synopsis & the Character of Smokey

Chris Tucker on Friday is called, Smokey, and for good reason. Smokey is the movie’s main character, accompanied by his best friend Craig(Ice Cube). Both are drug addicts. Smokey works for a drug dealer named Big Worm, who gives him some marijuana to sell. However, Smokey first smokes most of it himself and then shares it with Craig, asking him to try it since he has nothing to do after being fired from work.

They finish the marijuana together. However, when Bug Worm finds out, Smokey denies his involvement and incriminates Craig, instead. Big Worm is furious and asks them to return with $200 by 10 PM or face death at his hands.

Craig scrambles to collect money by asking his mother, Betty, but she refuses flatly. After that, he goes to his girlfriend, Joi. However, she also refuses to give him anything on the pretext that he is cheating on her with Felicia, a drug addict. 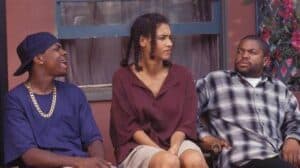 Deebo forces Smokey to break into Stanley’s house and steal $200. Smokey complies but does not get even a penny as Deebo keeps everything for himself instead. Smokey then goes to steal money from Deebo, who is with Felisha at her house.

However, a thief named Ezal hampers his plans by interfering. Smokey and Craig notice a black van with Big Worm’s men ready to kill them. So, they choose to hide in Craig’s room for the evening.

However, when they return outside, Big Worm’s men attack them by shooting, but they repel them using a pistol. A fight breaks out between Debbie(Nia Long) and Deebo, and the latter punches the former to the ground.

However, Craig comes to the rescue and leaves Deebo unconscious while suffering some injuries himself. It provides Smokey the perfect opportunity to grab the money they stole from Stanley’s house.

Craig breaks up with Joi on the phone, and his father informs him that his manager has called him back to work. Smokey pays his debt to Big Worm and calls to tell him that he will no longer be part of the drug business.

Just after saying that, he lights up a joint, indicating that he was only joking. With that, the movie ends.

After watching the movie, it is evident that Smokey is selfish and wants to make his ends meet without caring much about the other. It is clear from the beginning when he incriminates his best friend, Craig, smoking all the marijuana.

In the whole story, Smokey seems like a spectator, instead of someone involved in the action. For instance, Craig shoots at Big Worm’s men to defend Smokey and himself.

Similarly, Craig rushes to the rescue of Debbie when Doobie knocks her to the ground. Smokey does not care about the assault and is more worried about getting his money back.

He also does not help Craig in his fight with Doobie. He is a silent spectator when the other two are fighting. He finds the opportunity to have the $200 when Doobie is unconscious and takes them. Only once he is done does he think about Craig and attend to his wounds. 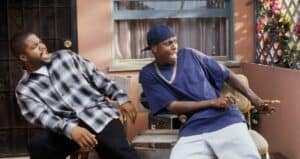 Friday established Tucker as a star, and for good reason. He brought the same energy on the sets of the movie as he did on Def Comedy Jam. His high-pitched voice with comedic expressions made people fall in love with him.

Moreover, his chemistry with his fellow actors was also commendable, especially with Faizon Love, who has called him his brother. Tucker’s lively and hilarious acting is a reason convincing enough to watch the movie.